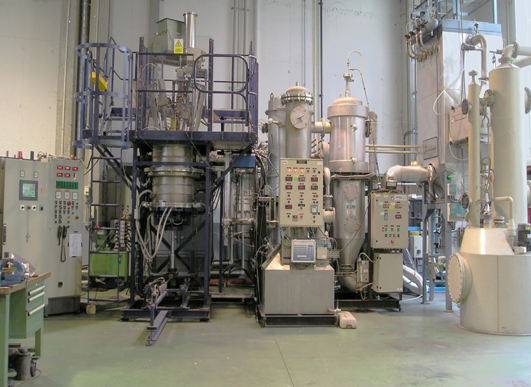 Plasma technology was validated at a 100 kVA pilot plant in TECNALIA for two materials, an Fe-rich residue from mining (goethite sludge) and a fayalitic slag.

Preliminary thermal studies at laboratory facilities in TECNALIA proved that the pyrometallurgical treatment of those residues could be an interesting approach. The scale-up to TRL 5 in the pilot plant demonstrated the technical feasibility of the plasma technology to obtain three marketable by-products: fly ash, metal and slag.

The treatment of the fayalitic slag and the goethite sludge produced a Zn+Pb oxides containing fly-ash, a metal with Fe concentration above 95% and a slag containing Si, Al, Ca and Mg oxides, proven of interest for the production of inorganic geopolymers.

In addition, evaluation of the global viability of the process, considering also environmental aspects and economics (CAPEX/OPEX) were studied.

The experimental data obtained from the tests performed for both residues at the pilot were used by TECNALIA to develop a model for the simulation of plasma furnace based thermal treatment. An engineer from TECNALIA moved to OUTOTEC’s facilities in Pori (Finland) and optimised jointly the model using HSC Chemistry software. Additional operations such as raw material feeding, briquetting, thermal pre-treatment and gas cleaning processes were also included in the simulation.

This model was afterwards used to simulate at industrial scale the behaviour of one other material within the METGROW + project, the landfilled Zn-rich sludge material. The mass balance and the energy requirements of the process were predicted and the physical properties and composition of each stream of the process were estimated. The data obtained were used to evaluate the techno-economic feasibility of the process, giving positive results.